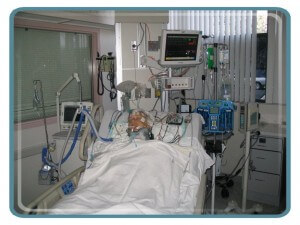 ONE day Radha suddenly fell down and her left side paralyzed. Then she was admitted in hospital. She was not able to talk or drink or do anything. She was unconscious. Her blood pressure was very low. As she was just 40 but had diabetes since last 7-8 years, which had caused bilateral renal failure. After complete medical checkup and investigation it was declared that she landed in Coma. Coma is a state of long unconsciousness of the brain.

One day Madhavi met with an accident and had severe brain haemorrhage. The clot formation in the blood vessels of brain took place and ultimately she went in Coma. Even after surgery she is still in Coma. In Coma the central nervous system and brain neurons gets injured and the patient loses his reactivity to any stimulus. According to law of nature every living organism including human being utilizes their hands, leg, hairs on skin, tails and even the chemical and biological system of the body to maintain its existence in the world and homeopathy follows this law of nature as its base. There is always a fight between external attacks of any sorts with internal resistance power of a living being and this fight decides the life span of the individual. To search the root cause of any disease first of all understands why the immunity was not able to resist the disease? What are the causes which make the body cells weak? Because body is nothing but a group of cells and tissues and every disease definitely creates few changes in the tissues. In every cell, there is anatomical and physiological changes takes place according to its genetic code.

Whenever any cell gets damaged due to any cause that is the beginning of the disease state in the body. Side effects of any medicine, nitrum deficiency, disease of liver and respiratory system, less body temperature i.e. hypothermia, injury to C.N.S., brain haemorrhage, clot formation in vessels of brain, infective pathology like meningitis and encephalitis, brain tumour, deficiency of thiamine, diabetes, etc. are the causes which make brain cells weak. Coma has different stages which are studied by glass glow scale. Homeopathy has proved itself beneficial in such cases. In homeopathy the causes of Coma history given by the patient’s relatives and investigations of the patient are fully considered and then the most selected drug is given in very low quantity. According to homeopathy, when the physical trauma is more, the quantity of the medicine should be very less and safe so that it can be continue for long time. When a proper drug according to the causative factor is given to the patient, the drug acts on the damaged brain cells. The breathing is also maintained by these drugs. The Coma patients are already admitted in the hospital but if homeopathic medication is done with an expert opinion the time span may be reduced and one can get the positive result.