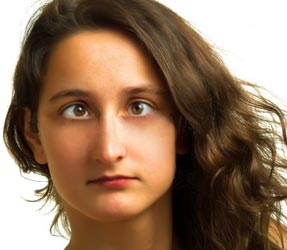 When a car loses its aligment it does not run properly in straight direction isn’t it? The same happens with eyes, when there is misalignment in two eyes, the both
eyes cannot look in same direction and that is known as Squint.
This alignment may get disturb constantly as only for some-time in a day. It is common in children but may occurs in adults.
When eyes are not aligned properly each eye focus on differ-ent object and brain gets two different signals leading to confu-sion and may have these effects — _
1. A child may ignored the image coming from the deviated eye and thus sees only one image, this suppression of image from deviated eye result in poor development of vision in this eye which is called as Amblyopia.
2. An adult has double vision, Dipropia because he can not ignore the image.
Squint can be classified as following
Depends upon angle/ degree as severity
1. Concomitant squint — Angle of squint is same in all direc-tion that you look. The two eyes move well, all muscles are work-ing, only alignment is missing.
2. Incomitant squint: The angle may vary when you look to left there may be no squint and eyes are aligned.
B) By the direction of turning eye :
C) 1. Constant 2. Intermittant
D) 1. Manifest Squint: Eye turn when open..
2. Latent Squint Eye turn when shut
E) Childhood Squint: Squint is common in first 3 years of life. In many cases of childhood squint, the reason is not known. In some cases the disorder of eye muscles, eyes, brain or nerves are there.
Causes: The movement of each eye is controlled by six muscles– That pull eye in var-ious direction. They are supe-rior, inferior, medial lateral mus-
cles and superior and inferior oblique muscles. Squint develops when these muscles do not work in a balanced way and the eyes do not move together correctly. Loss of co-ordination between the muscles of two eyes lids to misalignment.
Congenital Squint : Here the child is born with a squint. In most cases one eye turns inward, it is known as infantile esotropia, There is some genetic component to this type of squint.
F) Squint related to refractory errors : 1. Myopia — short sight, 2. Hyperopia — lone sight. 3. Astiematism. There arises due to
G) Other causes : A squint may develop in some children with ceribralpalsy,brain injury and various other  condition.Whena homoeopath deals a case of squint he prescribe I medicine after studying all above ,mentioned factors as well as I consider many more symptor such as — squint during or after brain diseases, is it on alternate day, during dentition, with diarhoea, is it convergent or dive gent, is it associated with meni gities as menstrual’ irregularitie is there any complaint of night terror or any type of fear, is
occurring after abdominal irritation, wormy diathesis, reading awhile, is the patent has sick look of face with dark circle around the eyes, is it period and painless and so on.
In homoeopathy there are lot of remedies for nerves, muscle veins, arteries etc. To balance the alignment between two eye not the only task for Homoeopathy but why there is this mi alignment is the main issue, then it may be either genetical non genetical. Homoeopathy start its work from the centre of tl disease and hence it improves the immunity makes the constit