Say No to Baldness ! 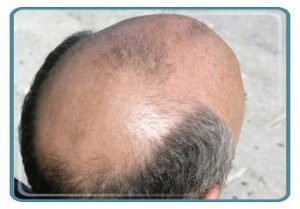 Mr. Ramakant is an Advocate by profession. He is 35 years old person with a shining moon on his Occipital. He is suffering from baldness in such an early age. He considers baldness in such an early age. He considers baldness as a result of heavy mental exertion, but it is just a wrong paradygm because mind and hair is representative of two different systems of body and they do not have any correlation with each other, actually hair grows from the small pores known as hair follicles. Each hair is divided into two parts, root and shaft. Root is situated under the skin layer and shaft is present above the skin. Each hair follicle secrets an oily material known as seburn, which maintains the shining and softness of hair and skin. A hair is made up of three layers, the inner one is medulla, the middle one is cortex and the outer one is cuticle. A protein known as keratine is secreted in the hair follicle along with melanine. This melanine is responsible for black colour of hair and skin. Moles are also due to melanine hyper secretion. Hair has average growth of 1 cm per month. As the old hair falls the new hair keep growing. In female body few hormones are favorable for hair growth. When hair falls in large bunches with itching of scalp and dandruff, leaving an open spot there, is known as Alopecia areata, but when hair falling is sudden and not only from a particular spot but including the whole scalp, it is known as Alopecia Universalis. Psoriasis and dandruff are more favorable conditions for hair falling and baldness. Few ladies are known case of Hersuitism. They have dense hair growth on upper lip and chin. Baldness and excessive air growth, both are dangerous. Application of external products may provide shining and glow to the hair but for permanent relief the disease should be cured by root as per the law of homoeopathy. Like every diseases hair falling also has multiple basic causes like psoriasis, dandruff, hormonal imbalancing etc. though food habits and pollution are associated as being responsible for hair fall, but the basic cause lies in our body. Homoeopathy medicines controls the root causes and thus helps in preventing the hair falling. As homoeopathy strengthens the resistance power of the person, then how the outer pollution can attack on your hairs. Homoeopathy treats the person in the disease, not the disease in a person.